In Search of Love - Sandhya 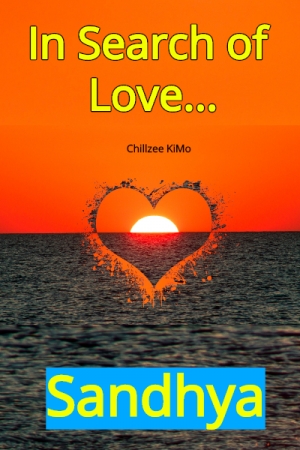 In Search of Love - Sandhya

The hero and heroine meet, fall in love, and get married! But suddenly the hero becomes the villain and leaves the heroine and disappear…

After many years they meet again and now the hero is head over heels in love with the heroine… The heroine though doesn’t reciprocate his love, still seems to like him…

Confused? Read the story to clear it off!

Nikhil was very tired. He had more than enough money with him, in fact everyone called him rich. But he was not happy and of course he knows the reason for that.

What's the gain in having all this money after losing the most precious substance in his life?

He looked outside the window in his room; the sun is just starting to show up. His home is in a hill station and hence the climate is always cold.

He was disturbed by a bus appearing in the scene. He wondered why a bus should come there at this time.

Then he remembered what his sister told him few days back.

Some college students are visiting this town for an educational tour, and they will be staying in one of their bungalows.

The college's principal and his mother are old friends and his mother had personally asked her friend to send the college students to stay in their bungalow during the tour.

Just then something caught his attention. At first, he thought it was his imagination as usual.

He closed and opened his eyes again, but the image didn't go away.

Yes it was her, how can he forget her?

She was standing in front of the bus along with so many other girls, but then she can't be a student!

A flurry of thought hit Nikhil like a storm. He wanted to go and talk to her immediately. He started running downstairs. It took less than 10 seconds for him to reach the entrance where the bus was standing. His sudden entry caught the attention of the people standing near the bus. But he was just staring at her and nothing else caught his attention.

She looked just the same. But to his disappointment, she didn't show any signs of identifying him, her face was as calm as the calm wind.

There was not even a single hint to show that she knows him already.

“Hi Nikhil, What are you doing here?”

“Nothing Pratap, just wondering what a college bus is doing at our bungalow, at this time.”

“Oh! I thought you knew that some students will be staying in our rear side bungalow for 10 days. Didn't your mom or sister inform you about this?”.

“Hmm. I think Kalai did mention this couple of days back. guess I forgot it. Ok Sir you go ahead with your work”

Kalaiselvi is Nikhil's sister, and Pratap is her husband. They are also staying in the same bungalow along with him and his mother, Gayathri.

Nikhil said bye to Pratap and left the place without even looking back.

Pooja was feeling very cold. Early morning cold wind was making her feel very numb. But she was feeling very satisfied. She was expecting this face to face meeting with Nikhil for some time now.

She knew that she did her part well today. She could see the disappointment in Nikhil's face when he found that there were no reactions in her face.

A smile appeared in her face. She never wanted to take part in this education trip. This is not at all part of her work. She works in the Accounts Department of AMN College. But since the other professor who was supposed to accompany the students fell ill, she had to join the trip to help her friend, Annie, the Botany lecturer.

She always liked the company of Annie. It was Annie who had helped her to get the job in AMN College. What would have happened if Annie had not helped her?!

As if to disturb her thoughts something hit her on her head, it was one of the students' luggage. The student apologized and started moving. She realized that the students had started walking with their luggage. She regained her senses, took her bag and joined her friend Annie. They both started walking together.

She could understand the curiosity in Annie's face. But Annie is more civilized to ask her anything directly. She always enjoyed the company of Annie just because she is not that nosy.

The bungalow looked very beautiful. It was an absolute stunning sight. The flowers and trees